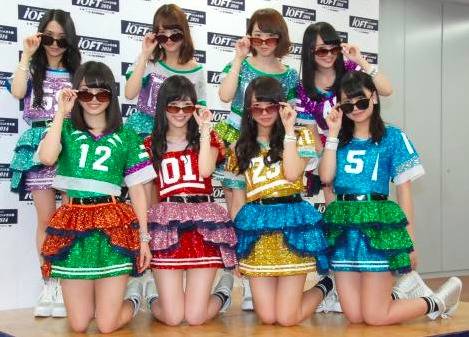 On October 20, the awards ceremony for 'The 27th Japan Best Dressed Eyes Awards' was held at Tokyo Big Sight. Among the winners were AKB48 who received an award in the 'Special Sunglasses category'.

AKB48 received this award as the celebrity who people want to see using sunglasses in their activities. Watanabe Mayu, Yokoyama Yui, Kojima Mako, Tano Yuka, Kato Rena, Kizaki Yuria, Minegishi Minami, and Mukaichi Mion appeared at the event in sunglasses and a mini skirt as the "sunglasses senbatsu" members.

AKB48 also won the special award back in 2011. Watanabe expressed, "We were really happy back then, but we are even happier this time around as we never thought of receiving such a wonderful award." In addition, she suggested, "I think it's a good idea to have a sunglass song that we sing while wearing sunglasses."