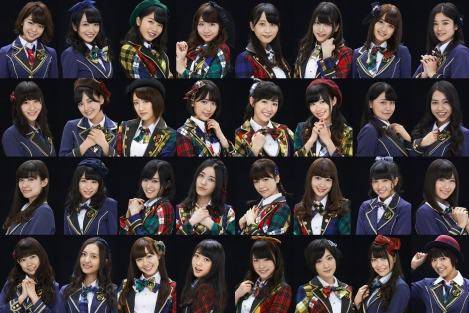 AKB48 have revealed the jacket covers and teaser for their 38th single "Kibouteki Refrain".

Since their 20th single "Sakura no Ki ni Narou" (released February 2011), AKB48 have released 18 million-seller singles consecutively. In the PV for their upcoming single, former AKB48 members Maeda Atsuko, Oshima Yuko, Shinoda Mariko, and Itano Tomomi, who were all centers for the these million-selling singles, make appearances.

The PV features the members running away from a mysterious group of men who is after a black bag that contains two golden microphones. It begins with Takahashi Minami who passes the bag to Maeda. Afterwards, the bag gets passed on to Matsui Jurina (center for 28th single "UZA", others), Shimazaki Haruka (29th single "Eien Pressure", others), Watanabe Mayu (30th single "So long!", others), Sashihara Rino (32nd single "Koisuru Fortune Cookie"), and Kojima Haruna (33rd single "Heart Ereki!"). When they are cornered by the group of men, former members Shinoda Mariko, (24th single "Ue Kara Mariko), Oshima Yuko (27th single "Gingham Check", others), and Itano Tomomi (31st single "Sayonara Crawl") make an appearance to help them.

As the golden microphones are finally passed onto the centers for "Kibouteki Refrain", Watanabe Mayu and Miyawaki Sakura, and the 32 senbatsu members perform the song in front of about 950 extras. Then, they make a run for it again to continue passing the baton.

The PV was directed by Sasaki Hiroshi who was in charge of the CMs for Softbank's 'Shirato Family' and Suntory Boss' 'Uchuujin Jones'. "AKB has a nearly 10-year history. It all begins with Takahashi Minami-san who has supported the group since the beginning. The graduated members are the best cheerleaders for the present members. I believe that a footage that ties the cord of hope between the faces that have carried each generation and the new centers will be enjoyed by even those who don't know AKB very well," he said.