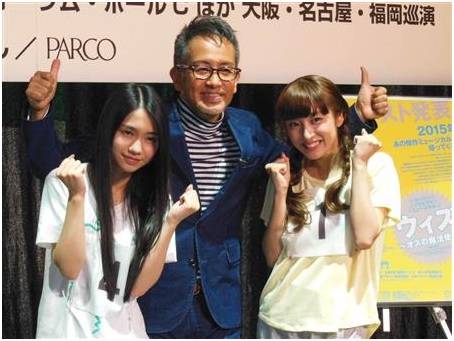 On October 21, it was revealed that AKB48's Tano Yuka (17) and NMB48's Umeda Ayaka (25) have both been cast in the lead role for the musical "The Wonderful Wizard of Oz." This decision came after a final round of auditions amongst the AKB48 group members.

Former AKB48 member Masuda Yuka (23) previously won the lead for 2 consecutive years starting in 2012. Stage director Miyamoto Amon (56) spoke about the unprecedented casting of double leads with, "I did not have any reason to drop either of the girls."

The auditions began in July and 6 members were chosen from amongst 108 for the final stage of the auditions. The members demonstrated their singing, dancing, and acting prowess in the auditions.

The moment that the leads were announced, both Umeda and Tano brought their hands to their faces to cover up their emotional tears. Umeda, who was passed over for the lead previously stated, "I can finally see the stage that I could not see 2 years ago." This past spring, she performed in her first musical "In the Heights" as the lead heroine. She spoke about this opportunity to play a 15-year-old Dorothy with, "I will try my best to act young."

This is the first ever musical for Tano, who is known as the best dancer in Team K. She spoke happily about winning the lead role with, "This is a dream come true. I would like to cultivate my character by studying hard together with Umeda." The musical will run from March 8 – 22, 2015 at the Tokyo International Forum Hall C. It will also run in Osaka, Nagoya, and Fukuoka.