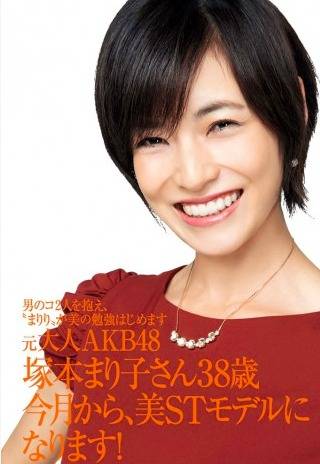 Former 'Otona AKB48' Tsukamoto Mariko, also known as "Mariri", made her modeling debut on the December issue of 'Be ST' which was released on October 17.

Earlier in April, the the 38-year-old mother of two was chosen out of 5,066 applicants to become 'Otona AKB48'. Until her "graduation concert" on September 1, she participated in CMs, concerts, and handshake events.

In the magazine's interview, Tsukamoto reflected, "I don't have any regrets being in AKB48. Although there were days when I was so tired and fell asleep by the front door after returning home, as well as days when cried so much in front of my husband." She continued to express, "My family's goodness, the members' kindness. I realized that no matter what age you are, you can do anything as long as you don't give up."

Regarding her modeling debut, she said, "Since I'm given such an opportunity, I want to enjoy it. I want to soak up knowledge about beauty and polish my womanhood."