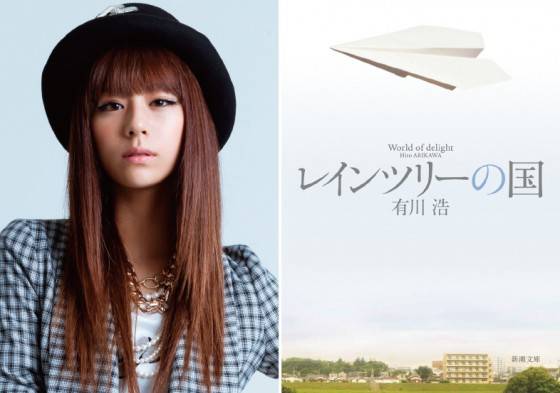 Tamamori will play the role of 'Sakisaka Nobuyuki', a salaryman who falls in love with the heroine 'Hitomi Rika'. The role of 'Hitomi' will be played by model Nishiuchi Mariya. On his first time playing the lead in a movie, Tamamori expressed, "I was honestly very happy. It's my first time being in charge of a lead role for a movie, so I am giving it my all."

Based on Arikawa's long-selling novel, 'Raintree no Kuni' is a love story that begins when Nobuyuki comes across a blog called 'Raintree no Kuni' that contains impressions on a book that he loved during his middle school days. After exchanging e-mails with the blog's owner Hitomi, who refuses to meet people in person, Nobuyuki falls in love with her. The movie will be directed by Miyake Yoshishige, who was also in charge of film adaptations of Arikawa's 'Kencho Omotenashi ka' and 'Hankyu Densha Katamichi 15-fun no Kiseki'.

Tamamori commented on his role, "He's very straightforward. He's the kind of person who clearly states what's on his mind. A complete opposite of me." He added, "It's my first salaryman role, so in advance, I asked my friends what kinds of things are difficult." Finally, he gave the appeal of the movie, saying, "It's a warm movie that portrays the love of two straightforward people, so I want those who watch it to become all tingly inside."

As for Nishiuchi, this will be her first time starring in a live-action film. "It was my goal to star in a movie, so I was very happy to receive the offer," she shared and reflected, "Tamamori-san cheerfully came to talk to me exactly in the image of Nobuyuki. The director even gave me advice about my role. So I was able to relax as I went into set."

Filming for the movie started on October 18. It's expected to take about a month mainly in Tokyo and partially in Osaka.

'Raintree no Kuni' will open in theaters nationwide in 2015.