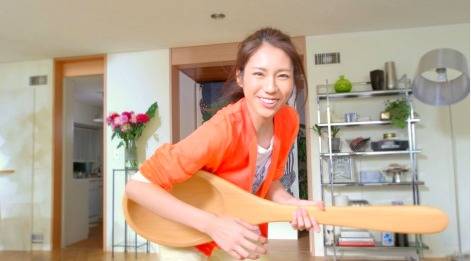 Actress Matsushita Nao will star in the new CM for 'Meiji Creamy Smooth' playing the air guitar in a vibrant and lively manner.

Before the CM shoot, Matsushita claimed she was nervous as she usually doesn't play the guitar. However, she showed confidence in the result saying, "It became more and more fun, and I was able to move in ways I never thought I could move. I had fun."

Matsushita appeared in the CM wearing causal clothes; a t-shirt, pants, and cardigan. She holds onto a big wooden spoon and strums it like a guitar. There were times when the actress jumped around too much during the shoot that she slipped and fell onto the floor.

There was also a scene where Matsushita kisses a slice of bread. She revealed, "I didn't think of it as bread, but I kissed it while imagining 'a person I love'."