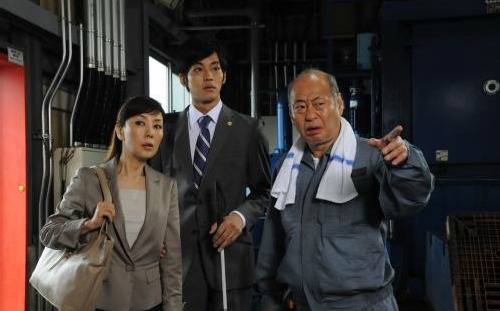 The drama is based on an autobiographical novel titled "Zenmo no Boku ga Bengoshi ni Natta Riyuu" by Ogoda Makoto. It's a human mystery that tells the story of a blind lawyer named 'Okochi Kensuke' (Matsuzaka) who searches for the truth of cases by using his other senses.

This was Matsuzaka's first time playing a blind role as well as a lawyer role. In the drama, there are scenes where the protagonist Kensuke visits the crime scene using a white cane and also scenes where he stands in the court room with an electronic organizer with a Braille display. In order to perfect his character, he observed the life of lawyer Ogoda by visiting his office, staying over his house, and spending time with his wife and kids.

Matsuzaka reflected, "I was conflicted upon receiving this offer. Should I do it? Will I really be able to do it?" He continued, "I played the role of a blind man so seriously that I remember the voices of my co-stars clearly, but I don't remember what their faces looked like."