Members of 'Baito AKB' to make their CM debut 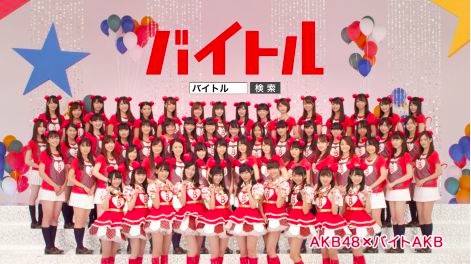 The 53 members of 'Baito AKB' will be making their CM debut. They will co-star with AKB48's Watanabe Mayu, HKT48's Sashihara Rino, and other AKB members in the new CM for part-time job information website 'Baitoru'.

'Baito AKB' is a collaboration project between AKB48 and 'Baitoru'. Out of 13,246 applicants, 53 of them were chosen to work part time for 1,000 yen an hour. Besides Watanabe and Sashihara, AKB48's Kojima Haruna, Oshima Ryoka, Okada Nana, Kizaki Yuria, Mukaichi Mion, Kawamoto Saya, AKB48/SKE48's Matsui Jurina, and HKT48's Miyawaki Sakura appear in the CM. They wear costumes with mouse ears and a tail in the image of Baitoru's character "Chuichi", and perform to "Baitoru Rotation", a parody of AKB48's hit song "Heavy Rotation".

The members of AKB met 'Baito AKB' for the first time on the set for the CM. Among the members of 'Baito AKB', Mayuyu was surprised to find Saeki Mika, a former 4th generation AKB48 member who graduated in August of 2009. Mayuyu and Saeki, who both belonged to Team B, had an unexpected reunion on set. It's said the girls of 'Baito AKB' were nervous to appear in their first CM. Even when it wasn't their turn, they carefully monitored the AKB members' performance.

A campaign website has been launched where you can see the CM, as well as the making footage of the CM. There will also be an introduction of the members of 'Baito AKB' and a 'Baito Activity Diary' later.