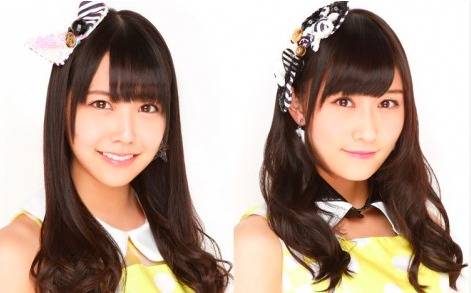 On September 30, NMB48 wrapped up their first nationwide tour at Pacifico Yokohama, where they announced the senbatsu members for their 10th single (untitled; November 5 release). For this single, the center position will be claimed by Shiroma Miru (16) and Yagura Fuko (17).

Right before the encore, the 22 senbatsu members along with Shiroma and Yagura were announced through a VTR. Shiroma, a 1st generation member who ranked 43rd in this year's 'General Elections', said with a big smile, "I'm very happy. I've been given a really really big chance, so I want to hold onto it tightly and shine brighter than anyone else."

Meanwhile, Yagura is a 2nd generation member who ranked 41st in the 'General Elections'. "Until now, I've watched the backs of Sayaka-san (Yamamoto Sayaka) and Mirukii (Watanabe Miyuki), and had them pull me along. This time, I was chosen as center, so I will devote all my energy and pull NMB48 in order to live up to the expectations," she declared powerfully.