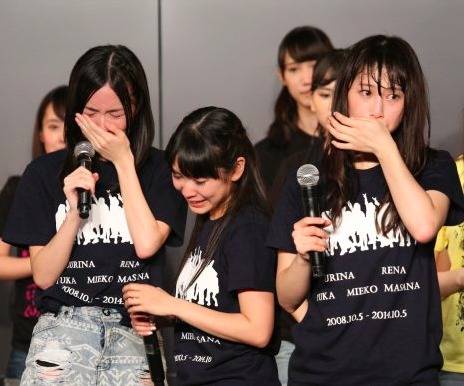 On October 5, SKE48 celebrated the 5th anniversary since their theater debut with a special concert at SKE48 Theater. During the concert, there was a surprise announcement that the groups would be holding their first 47-prefecture tour and that their first documentary film 'DOCUMENTARY of SKE48 (tentative title)' would be released next spring.

The stage opened with a vaulting box that appeared during SKE48's 1st anniversary concert back in July of 2009. After promising their leap in the future, the 66 members received signal from theater manager Imamura Etsuro and challenged themselves to a 6-section vaulting box one after another.

The day before, SKE48 held their first 'Zenyasai' ('The Eve of') with the cooperation of SUNSHINE SAKAE (B1F?6F) where SKE48 Theater is located. The event featured a variety of activities ranging from golf lessons with Yamauchi Suzuran and Umemoto Madoka to talks from the managers. The restaurants featured a special menu that the members of SKE48 who are good at cooking came up with themselves. During a talk show at the event, it was announced that SKE48 would release their 16th single on December 10.