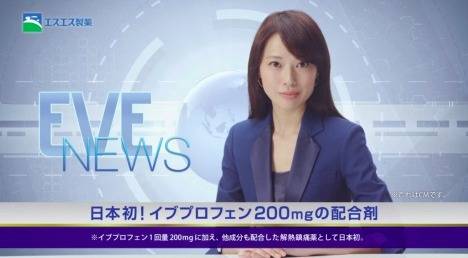 It's been revealed that actress Toda Erika will be challenging herself to her first newscaster role in the new CM for SS Pharmaceutical's 'Eve A Jou EX'. "Please take notice to whether or not I am able to successfully deliver my first news," she stated.

In the CM, newscaster Toda delivers the news on a program that's displayed on an electronic billboard. She then watches the news spread throughout the world from atop a building.

Toda was able to attend to the director's request to "express a feeling of 'happiness' that's hidden beneath a cool expression" with ease. It's said that she only had one NG (no good) take.

The CM will begin airing nationwide on December 3.