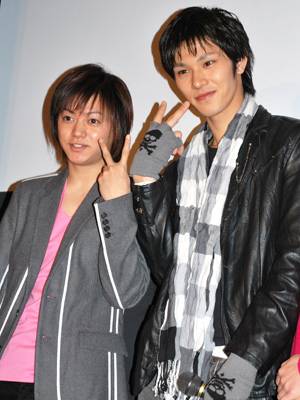 On November 10, D-BOYS member Yanagi Kotaro (pictured on the left) announced through his official blog that he would be going on a long-term break.

In 2003, Yanagi was selected to play the lead role in the popular musical 'Tennis no Oujisama' which raised the expectations of his future performances. However, he was involved in a traffic accident and still suffers from its after-effects. Regardless, he's continued to work, starring in movies such as 'Ikemen Bank THE MOVIE' (2009) and 'Kanzen Naru Shiiku Maid, for you' (2009). He's even released an essay in 2010 titled 'Syougai Yakusha ~Hashirenakutemo, Serifu wo Wasuretemo~' in which he talks about his experiences as a "handicapped actor".

On his blog, Yanagi began by saying, "I have higher brain dysfunction." He continued to explain, "I became sick recently, and after talking about it with my doctor, family, and the people around me, I decided to take a long break."

He added, "Oh, I'm not saying that I will retire. It's a long-term break." Finally, he called out to his fans, "Please continue to support the other members while I'm gone."