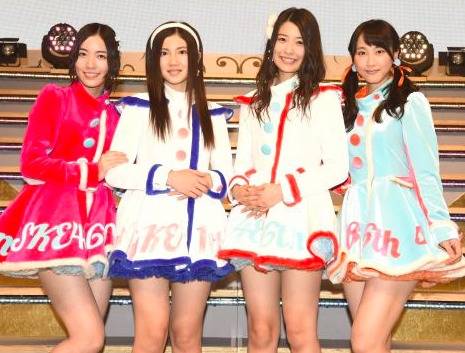 On November 2, SKE48 wrapped up their event 'SKE48 Request Hour Set List Best 242 2014' at Nagoya Congress Center where they announced the senbatsu members for their new single "12-gatsu no Kangaroo" which will be released on December 10.

Ever since their 1st single "Tsuyoki Mono yo" (August 2009 release) to their latest 15th single, the center position was claimed by either Jurina alone or the double Matsuis. Regarding the center change, Jurina stated, "I am really glad that there is a new presence to pull SKE48. I want to do my best to support the two without losing." Rena also said, "Change is important. While supporting the two, I want to create an environment where they can bring out their individualities."

During the event, the 22 senbatsu members performed "12-gatsu no Kangaroo" for the very first time. As the new center, Kitagawa commented, "I had to hold back my tears since we were on stand by. I was so anxious, but with the support of Jurina-san and Rena-san, I was able to relax and stand on stage."

Miyamae reflected, "When I heard that I was going to be center, at first I thought it was a surprise and it didn't seem real, but singing in front of the fans, I strongly felt that it's beginning today. As my first time being in the senbatsu, I was worried about the fans' reactions, but there were shouts of encouragement, so I was very relieved."

It appears that the entire AKB family is undergoing a generation change with Watanabe Mayu and Miyawaki Sakura (concurrent with HKT) as the center for AKB48's 38th single "Kibouteki Refrain" (November 26 release), and Shiroma Miru and Yagura Fuko as the center for NMB48's 10th single "Rashikunai" (November 5 release).