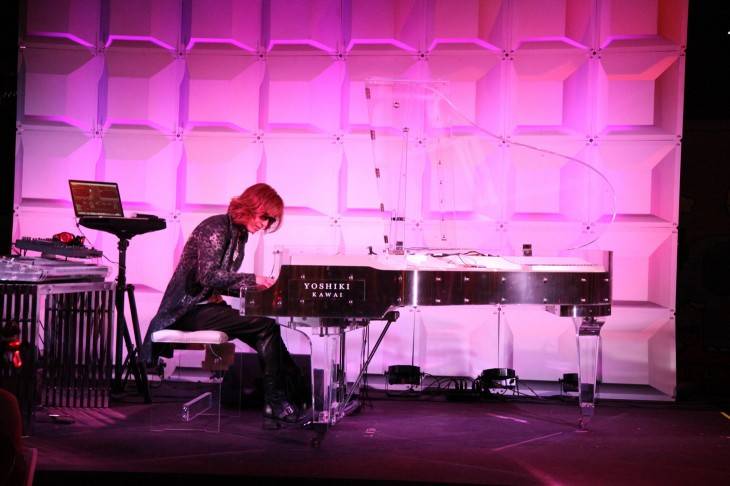 X JAPAN's YOSHIKI made an appearance at the Hello Kitty convention 'Hello Kitty Con 2014'  on October 29 at The Geffen Contemporary at MOCA in Los Angeles. During the opening event, he performed Hello Kitty's official theme song, tentatively titled "HELLO HELLO", which he produced himself.

Back in 2007, Hello Kitty's designer Yamaguchi Yuko directly offered for YOSHIKI to write the theme song. Since then 7 years have passed and he has finally finished the song. This isn't YOSHIKI's first collaboration with Hello Kitty as their collaboration line 'yoshikitty' was released under Sanrio in 2009. Also, YOSHIKI was close friends with the son of Sanrio founder Tsuji Kunihiko, and reportedly dined together the day before Tsuji passed away in November of last year.

At the convention, YOSHIKI first performed a piano version of "Forever Love" in front of about 2,000 celebrities who were invited by Sanrio. Then he surprised the crowd by performing an EDM version of "HELLO HELLO" for the very first time.

While YOSHIKI performed an EDM version with English lyrics, "HELLO HELLO" will also have different versions such as classic, pop, and rock in different languages.