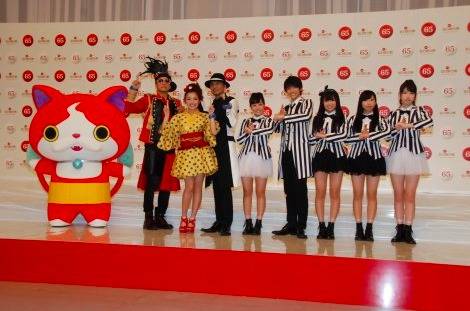 It's been revealed that 'The 65th NHK Kohaku Uta Gassen' will feature a collaboration between Arashi and popular game/anime 'Yokai Watch'.

There will be a special corner within the program in which King Cream Soda and Dream5, as well as the anime's characters 'Jibanyan', 'Fuyunyan', and 'Whisper' will take the stage with other performers. In that corner, the characters of 'Yokai Watch' will perform Arashi's debut song "A?RA?SHI" in their own special version.

'The 65th NHK Kohaku Uta Gassen' will broadcast on December 31 for 4.5 hours from 7:15 pm to 11:45 pm. This year's theme is: "Utaou. Oomisoka wa Zenin Saka de!" which translates to "Let's sing. Everyone participate on New Year's Eve!" Actress Yoshitaka Yuriko and Arashi will be the hosts for the red and white teams respectively.

Arashi member Ohno Satoshi commented, "I've played non-human roles in the past, but I never imagined collaborating with monsters as Arashi. Who knew that this year's theme of 'Everyone participate' meant that!! Once again, I felt the power of this national program called 'Kohaku Uta Gassen' that overcomes the barrier between human and monsters."