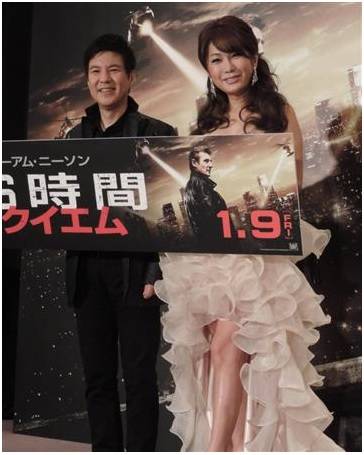 She gave them a blessing on their upcoming wedding with, "Japan is heading towards the era [where same-sex marriage will be widely accepted.] I would like to follow them as well." When asked about Christmas, however, she responded sadly with, "The other day, I parted ways with the 23 year old man that I was dating. He was a two-timer...How disappointing~."

Talent Sekine Tsutomu (61) also appeared at the screening. The movie is an action-packed film about a former CIA agent who works to protect his family from criminals. While Sekine's daughter and talent Sekine Mari (30) married Korean singer K (31) in August, he joked that, "If Mari was being attacked by a shark or bear, I would be the one to use my body to protect her."