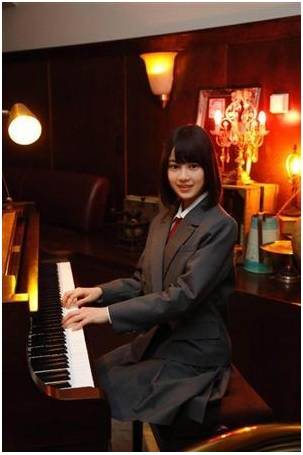 On December 21, it was announced that starting January 14, Nogizaka46's Ikuta Erika (17) would appear as a regular on Fuji TV's serial drama "Zanen na Otto." (airs Wednesdays at 10 PM.)

The drama is about a husband, played by Tamaki Hiroshi (34), who dreams about becoming "the perfect husband" after relations with his wife sour. Ikuta plays Mika, the daughter of the protagonist's superiors (played by Kishitani Goro = 50 and Ohtsuka Nene = 46.) Ikuta's character is a 17 year old high school student who dreams of becoming a pianist, but runs into conflict with her family due to their disagreement on attending university.

Ikuta, who served as the center for Nogizaka46's song "Nando me no Aozora ka?," began playing the piano when she was 3; she will showcase her skills live in the drama. She spoke about her piano performances in the drama with, "Rather than just moving my fingers, I think it would be great if the feelings of my character are woven into the melody [I am playing.]"

As an actress, Ikuta made her debut this past October as the main character in the musical "Kushi no Prelude." She spoke about her hopes for her first serial drama with, "I hope to learn a lot from my co-stars. I am ecstatic about co-starring with Tamaki-san as I watched his starring drama 'Nodame Cantabile' and I really liked the music."

THE RAMPAGE's RIKU, Kawamura Kazuma & Yoshino Hokuto appear on 'THE FIRST TAKE' for the first time
11 hours ago   0   132