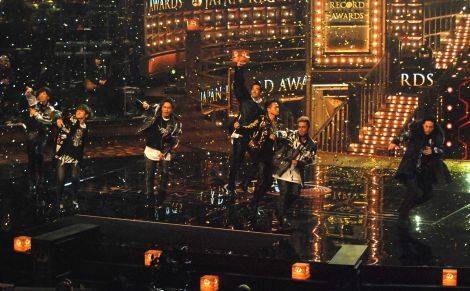 On December 30, the annual music awards show "the 56th Japan Record Awards" was held at the New National Theatre, Tokyo. Sandaime J Soul Brothers from EXILE TRIBE's "R.Y.U.S.E.I." won the grand prize "Japan Record Award," which was a first for the group.

The leader NAOTO commented, "I'm just happy. I feel honored to receive this award among many wonderful artists. It's the award that is given thanks to everyone."

Producer HIRO also showed up on the stage of the awarding ceremony and commented, "I'm grateful. As ATSUSHI (EXILE's vocalist) also received the best vocal performance award, Sandaime is ending this year with the best way as well. We were able to repay our fans, and the members were also able to be dutiful to their parents."

There were many fans outside the venue gathering for them, and when they heard the news of the group receiving the award, many of the fans started crying.

"R.Y.U.S.E.I." is the group's 13th single that went on sale in June, and it was ranked 30th place for Oricon's yearly single ranking.