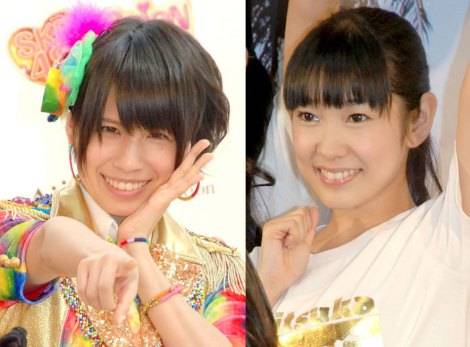 SKE48's first generation members, Nakanishi Yuka (25) and Sato Mieko (28) will be graduating from the group at the end of March 2015.

They made the announcement during the team S performance held at SKE48 Theater on December 24.

Nakanishi originally passed AKB48's "the First Kenkyuusei Audition" held in May 2007, and joined the group as a 4th generation AKB Kenkyuusei. She was then transferred to SKE48 in August 2008.

Nakanishi has been the leader of Team S, as well as the captain of the whole SKE since April of 2013.

On the other hand, Sato who is the oldest member of the whole 48 group, passed  the "SKE48 Opening Member Audition" in July 2008. She was once demoted as a Kenkyuusei in February 2009, but returned as a regular member in May of the same year. She is currently serving as the sub-leader of Team S.

Sato revealed that she would belong to a new agency, and continue talento activities and music activities in the Tokai region.

With the girls' graduation, there will only be 3 first generation members (Matsui Jurina, Matsui Rena, Oya Masana) remaining in SKE48.