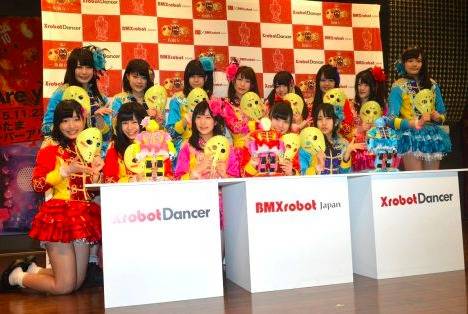 Earlier this month, 5 members announced their graduation from Kamen Joshi. On this day, leader Sakura Nodoka made the announcement that they would be welcoming 6 new members in late-April. She declared, "As a brand new Kamen Joshi, we hope to increase in both power and force in order to run with an even greater speed. We will do ourĀbest aiming to become a national underground idol!"Ā

During the event, 13 members of Kamen Joshi had a dance off with entertainment robot 'XrobotDancer'. Impressed with the robot's dance moves, Mori Kanon expressed, "The dance was wonderful. We've been defeated." Sakura added, "I want it to become our new member."