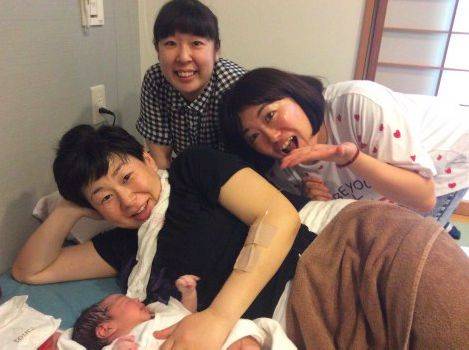 According to the announcement, both mother and baby are in healthy condition. Her husband, broadcast writer Suzuki Osamu (43), and Morisanchu's Murakami Tomoko (35) and Kurosawa Kazuko (36) were present during the delivery.

Through her agency, Oshima introduced her son, saying, "Today, I was able to deliver my child safely. Just like me and my husband, he was a big baby at 3,885 grams." She expressed her joy at becoming a mother, "I want to raise him hoping that many smiles and fortune will come upon him." Finally, she commented, "I am deeply grateful for the people who have supported me. Thank you very much. I hope he will become a child with a big heart and body."

Oshima and Suzuki married back in 2002. She announced her pregnancy this February when she made a telephone appearance on NTV's "Hirunandesu!". She plans on returning to work once she has recovered and settled down.