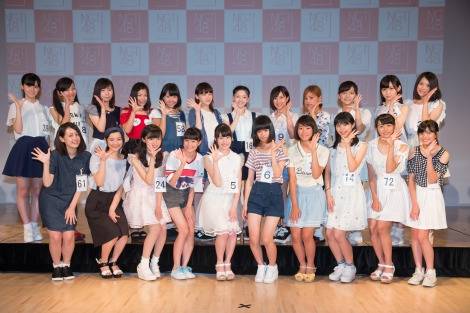 On July 25, the final screening to choose the first generation members of NGT48, AKB48's upcoming sister group based in Niigata, was held in Nagaoka city, Niigata.

After the first (document screening) and second (interview) examinations, a total of 74 candidates participated in the final screening, which tested their dancing and singing skills. As a result 22 girls passed the audition. The oldest winner is 20, while the youngest is 12 years old.

After this, there will be an interview with their parents, as well as the confirmation of intent of the girls, and then the first generation members will be officially finalized.
NGT48 will then be launched, including Kitahara Rie who will be the captain of the group, Kashiwagi Yuki who will hold the concurrent posts in both AKB48 and NGT48, as well as two drafted members Nishigata Marina and Ogino Yuka.

The 48 groups' producer Akimoto Yasushi who served as a judge, commented on "755", a live talk application, that "As all the candidates were wonderful girls, it was a quite hot contest. Those of you who could not make it this time, please try again without giving up."
Kitahara also tweeted how she can't wait for the group to be launched.