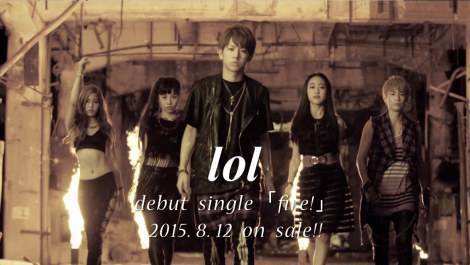 
lol consist of two men (Sato Yusuke and Komiyama Naoto) and three women (honoka, moca, and hibiki), and they are releasing their debut song "fire!" on August 12.

As three of the members -- Moca, Honoka, and Komiyama-- are from Osaka, and this marked their first commemorative event in Osaka, the local audience welcomed them with excited cheering.

During the event, the group performed not only their debut song, but also "HEARTBEAT", the theme song for TV Asahi anime "Tribe Cool Crew", as well as their standard song for live "gimme gimme".

At the end of the event, the audience shouted, saying "Be 100% sure to come visit here again~!" which the group answered with the promise "We'll come back!"

Below is the music video (short ver.) to lol's debut song "fire!" which was released earlier this month.
Check it out, and tell us what you think!