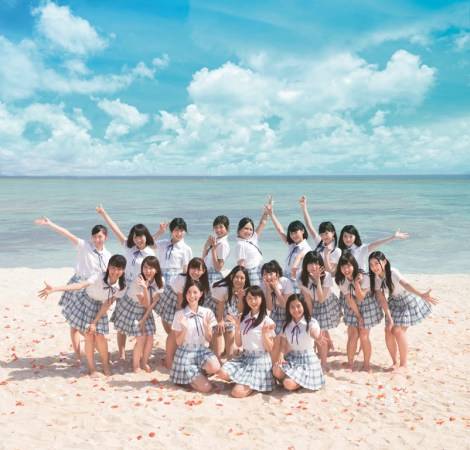 Popular idol group SKE48 has released the music video (special edited ver.) to their upcoming single "Mae Nomeri" (to be released on August 12).

This is the last single for member Matsui Rena who will be graduating from the group at the end of August.

Apparently, the MV was shot in Okinawa on the following day after Matsui announced her graduation on June 10 through radio program, "AKB48 no All Night Nippon ~Kinkyu Tokuban! Konya, Matsui Rena kara Judai Happyou SP~".

One of the highlight scenes could be a surprise party for Matsui prepared by the fellow members who arrived in Okinawa ahead of time for it, and also a dance scene on a white beach.

"Mae Nomeri" will have Type A~D for both limited and standard editions.

All versions include a follow up song "Seifuku wo Kita Meitantei", sang by "Dreaming Girls" which is consisted of chosen young members, while Type-D includes Matsui's solo song "2588 Nichi" which refers the the number of days from when Matsui passed the audition to the day of the graduation concert.

Also, the special footage for DVD coming with Type-C and Type-D contains first half and last half of "2588 days. Documentary of Matsui Rena" respectively.

Check out the MV above!