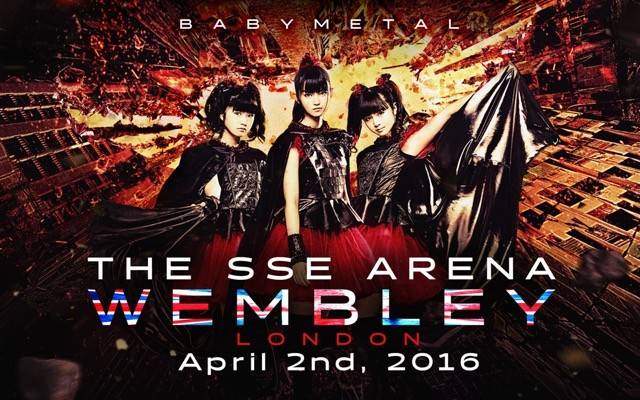 BABYMETAL have announced that they will hold a one-man live at The SSE Arena, Wembley in London on April 2 of next year.

The SSE Arena, Wembley is an indoor arena that was built in 1934, seating about 12,000 people. X JAPAN is also scheduled to perform at the venue in March of 2016.

Last year, BABYMETAL held a one-man live at O2 Brixton Academy in London for 5,000 overseas fans. On their upcoming concert, MOAMETAL commented, "I was very surprised. I am very happy that we have the opportunity for many people, regardless of country, gender, and age, to learn about BABYMETAL's music and performance," YUIMETAL said "I want to exert myself even more in order to overcome anything," and SU-METAL shared, "Honestly, I still can't believe it! But I am already looking forward to holding a live again in England!"

In addition, a live footage of "Ijime, Dame, Zettai" from BABYMETAL's appearance in the rock festival "Sonisphere Festival UK" has been uploaded onto the group's YouTube channel.