'Nobunaga Concerto' to be released as a movie next year 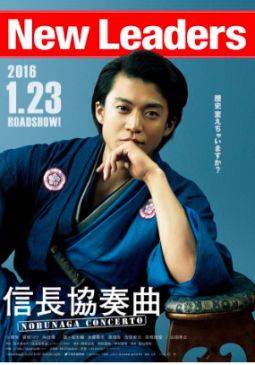 It's been revealed that Ishii Ayumi's manga 'Nobunaga Concerto' will be released as a movie on January 23 of next year.

Like in the drama series, actor Oguri Shun will once again reprise the double role of 'Saburo' and 'Akechi Mitsuhide'. The filming for this movie began in early-April and it ran for over a 2-month period in Tokyo and other Kanto regions, as well as Kyoto. It features a major battle scene with over 300 extras, and they even used real temples and shrines such as the Kamo Shrine (Kyoto) and the Hikone Castle (Shiga).

On wrapping up the shoot, Oguri commented, "Being involved in this work for over half a year, there were many difficult times, but I'm glad I was able to live Oda Nobunaga's life until the end." He added, "This time, there are many battle scenes where not just Saburo alone, but the Oda family fight together. There are many things to look forward to, including how Saburo and the real Nobunaga as Mitsuhide end up."