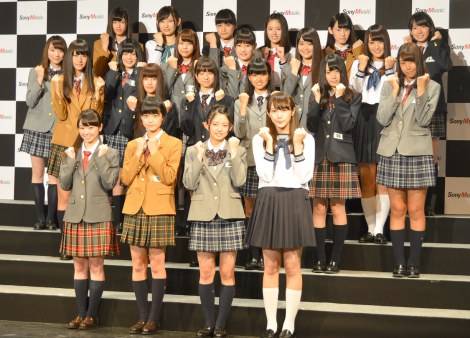 On August 21st, the final audition to pick the first generation member of Toriizaka46 --Nogizaka46's related group-- was held, and 22 girls have been chosen among 22,509 applicants.
The average age of the members is 16.8 years old, as the youngest member is 14 while the oldest one is 20 years old.

The audition had its first paper screening, second screening (self appeal + photo shooting, held in 6 different cities across the country), third screening (dance + singing), and this final screening (singing + interview) which was overseen by Akimoto Yasushi, the group's producer.
There were 45 finalists who participated, and 22 girls among them passed the audition as the group's first generation members.

During the group's 1st photo shoot, the management staff suddenly told the girls that its group name would be changed to 'Keyakizaka46', however, the reason for this change was not revealed even to the press, as they said it would be cleared later.

According to the management company, Keyakizaka46 is categorized as "the second group from the Sakamichi (='slope') series", and it's been undecided at this moment if the group would be positioned as Nogizaka46's sister group or its rival group. It will be decided by its members with how the group proceeds.