Yamamoto Koji talks about his unrequited love for Horikita Maki 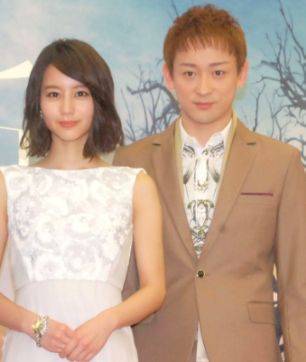 Everybody was surprised to learn about actress Horikita Maki and actor Yamamoto Koji's sudden marriage. On August 24th, Yamamoto made a VTR appearance on Fuji TV's 'Tokudane!' where he talked about his unrequited love for Horikita.

The two first co-starred in the drama 'Atashinchi no Danshi' in 2009. On his first impressions of Horikita, Yamamoto said, "She was mentally strong and self-composed. I was drawn to that." He also shared, "I asked for her number 6 years ago, and she gave it to me, but it was her office number."

Then in 2010, Yamamoto and Horikita played the role of husband and wife in 'Wagaya no Rekishi'. Yamamoto talked about his impressions of Horikita during their second time working together, "She was a strong-willed actress who could honestly say what's on her mind." After filming for the show was done, he invited her to go out for a drink. However, she rejected his invitation.

In May of this year, the two co-starred for the third time in the stage play 'Arashigaoka'. During this time, Yamamoto wrote over 40 letters to Horikita hoping to capture her heart. He revealed that he didn't receive any replies from her. So he asked her for her number once again, but she refused to give it to him. Afterwards, he decided to give her his number. Yamamoto had thought that it was all over, when that same night, she messaged him on LINE saying, "It's Maki."

Then, Yamamoto heard that Horikita would be going to Kyoto. "By intuition, I bought a shinkansen (bullet train) ticket, while holding a ring filled with my feelings. If she was on the [same] train, it would be fate. Then it happened, she was on it," he said with a smile. He continued, "I didn't ask her to date me, but to marry me. It seems like my feelings were conveyed."