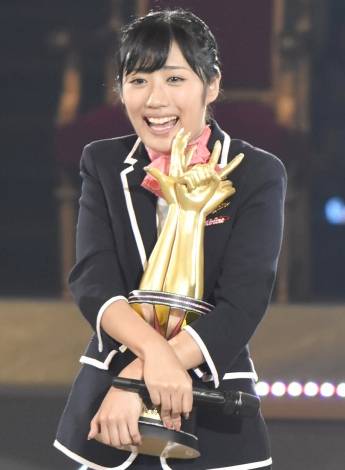 On September 16, AKB48 group held their annual "Janken Tournament" at Yokohama Arena, and the title of the 6th Janken queen went to AKB48 team K member Fujita Nana. Thanks to this, Fujita will be making a solo debut.

Fujita's opponent for the final round was Nakanishi Chiyori. Before the match, Fujita was making aggressive comments like, "I feel like I could win if it's Chiyori," but at the moment she secured her victory, she covered her face with her hands, and dropped on her knees.

When she received a trophy from the MC Fukuzawa Akira, she said while bursting into tears, "What have I done? Please buy my CD," and continued, "but it's a chance I obtained after 5 years, so I will do my best," which brought a big cheer from the audience of 12,000 fans.

As mentioned earlier, the winner gets to make her solo debut, while the members who ranked 2nd place to 16th, will be singing a coupling track for the CD, and the center of the coupling song will be the runner-up, which is Nakanishi this time.

The winners of the past Janken Tournament include Uchida Mayumi, Shinoda Mariko, Shimazaki Haruka, Matsui Jurina, and Watanabe Miyuki.