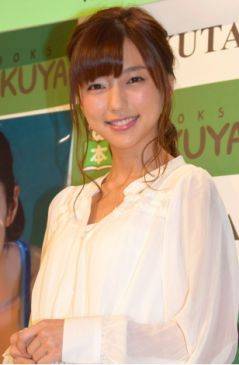 During an interview with reporters, Mano revealed that she succeeded in losing 5 kg (11 lbs) in a year and a half. She showed confidence in her body saying, "I'm finally satisfied."

Mano shared that she was heaviest during the shoot for movie "THE NEXT GENERATION Patlabor Shuto Kessen" a year and a half ago. Thus, she started a diet where she didn't eat any carbs at night. She reflected, "[At night] I would only eat salad. I started losing weight after the new year." She smiled as she said, "Every time I would release a photo book, I would think, 'I need to lose a little weight'. I'm finally satisfied."

Mano plays the heroine in movie "Minna! Esper da yo!" that's currently being shown in movie theaters nationwide. She will also star in TBS' drama "Kekkonshiki no Zenjitsu ni" starting in October.

Mano talked about how she recently attended her older brother's wedding as well. "My parents were really happy, so I want to get married someday. I want to be with someone who would accept my pace. I don't really care about age," she said.

The photo book was shot in Hawaii, her second time on the islands. "I couldn't do this a year ago," she said as she showed off her favorite shot out of the bunch.