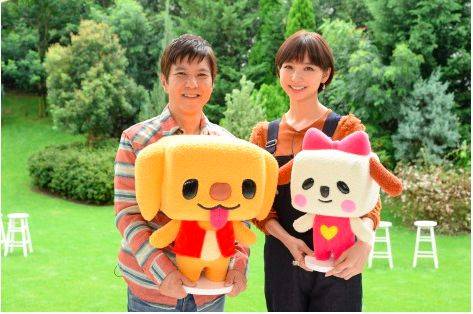 It's been revealed that talento Shinoda Mariko has recorded her first song since graduating from AKB48 in July of 2013. The song, titled "Kimi ga Iru Dake de", will be used in TV Asahi's program "Pet no Oukoku Wandaland" hosted by Shinoda and Sekine Tsutomu.

Shinoda commented, "This will be my second solo song. Akimoto-san gave me one song before my graduation. After graduation, I received this song written by Sekine-san." "Kimi ga Iru Dake de" is described as a cheerful rock song that will give you an uplifting feeling.

As the title suggests, "Pet no Oukoku Wandaland" is a show about pets, and will begin its broadcast on October 4.  For the program, Sekine and Shinoda designed adorable characters. Sekine designed "Ken-chan", a golden retriever wearing a red vest, and Shinoda designed "Lily-chan", a cute dog wearing pink clothes and a ribbon.

Shinoda stated, "This is the first time that something I drew will become a character for a program. I think it turned out to be a really cute character, so please watch it!"