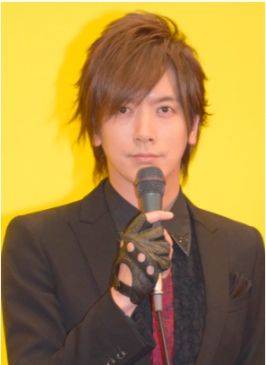 Previously, it was reported that DAIGO and Kitagawa Keiko would be tying the knot this coming January.

On October 13, DAIGO made a live appearance on the TBS program 'Jouhou Live Vivit' where he commented on the marriage rumors. "One thing I can say about this matter is, 'SF'. Super flying. I was really surprised. When I woke up, I saw that I had received messages from many people saying 'Congratulations'," he said.

DAIGO added, "I think it should be announced when it has taken proper form. When that time comes, I want to announce it to all of my fans and also everyone in Japan." He then called out, "Please watch over me warmly." While he talked about how the reports had surprised him, he did not deny it.

Afterwards, DAIGO was asked many questions by program MCs Kokubun Taichi (TOKIO) and Terry Ito. Some reports mentioned that DAIGO and Kitagawa went out on a "shabu shabu date," to which DAIGO corrected, "It's not shabu shabu, but sukiyaki." Finally, he declared, "If something happens and it's something I should talk about, I won't run or hide!"

Likewise, Kitagawa wrote on her official blog a few days ago, "I am surprised. I'm in a situation where I don't have anything to say. I am frustrated that I have caused trouble like this."

Source & Image: Oricon
Thanks to Karen Pang for the tip!