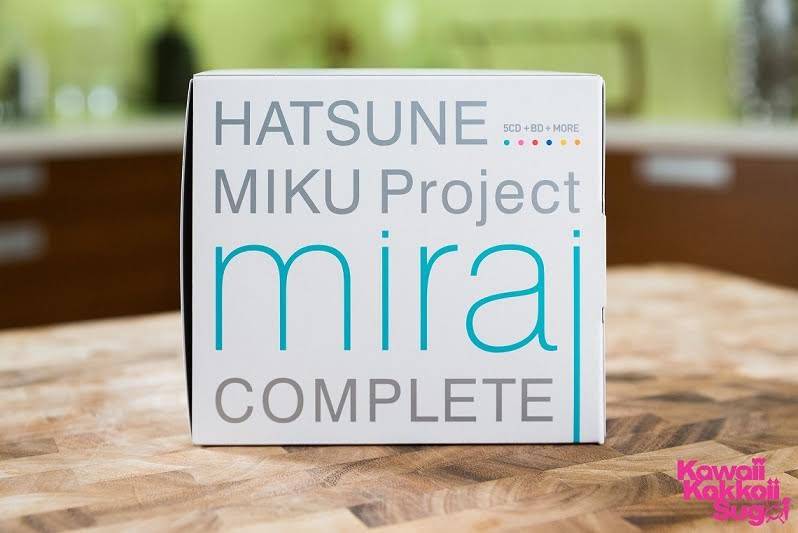 Complete when it's released on on October 26.

Hatsune Miku Project Mirai Complete is a complete collection of all soundtracks and videos from the 3DS Game "Project Mirai" series. Five CDs in the box feature tracks from popular game soundtracks to newly released room BGM tracks arranged by a renowned array of VOCALOID producers. Contained in the Blu-ray disk are opening movies of Project Mirai series, music videos of theme songs, and a digital art gallery as well as a special video that catches the crazy side of Hatsune Miku.

The box set edition also comes with a number of exclusive bonus items that Hatsune Miku fans will definitely want to add to their collections:

available at Kawaii Kakkoii Sugoi Shop in the U.S. and U/M/A/A STORE in Japan).

in Japan, Arc de Triumph in Paris, Statue of Liberty in New York and even the Great

Sphinx of Giza in Egypt. Fans can compose with their own lines for Mikudayo's speech

bubbles on the fifth board!

- 6 Sets of Vocaloid Characters Stickers: Stickers of 6 VOCALOID characters are

that enables Hatsune Miku fans to be chosen for a special secret event!

Corporation and is arguably the most popular of the Vocaloids to date. She is known for her extremely high octave range and ability to sing a multitude of genres. Today, Hatsune Miku has become a superstar around the whole world with dedicated exhibition and concert events in various countries. She officially collaborated with companies like Coca Cola, Toyota, Google, and Domino's. In 2014, Hatsune Miku performed opening acts for Lady Gaga's Artpop Ball tour across the U.S. and Canada and also made an appearance on the David Letterman show.

Since 2009, Kawaii Kakkoii Sugoi has been dedicated to promoting Japanese culture, especially Japanese music, on a variety of SNS platforms, including a news website and a YouTube channel. So far, its YouTube channel has garnered over 44.3K subscribers. As one of the best North American promoters specializing in Japanese culture, Kawaii Kakkoii Sugoi is growing very fast. Some of its clients include Universal Music, Sony Music Entertainment, Live Viewing Japan, Perfume, L'Arc~en~Ciel, VAMPS, LUNA SEA, ONE OK ROCK, MAN WITH A MISSION, MIYAVI, and SCANDAL.

Check out a variety of J-culture news on Kawaii Kakkoii Sugoi at: