Idoling!!! members burst into tears at their last concert 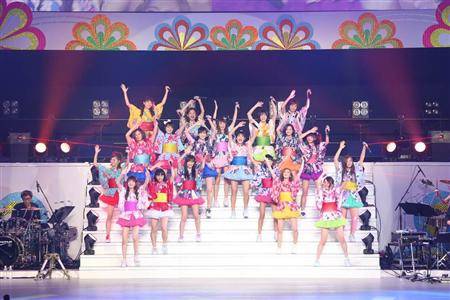 On October 5, 19-member idol group Idoling!!! held their last live concert at Nippon Budokan. While 6,500 audience and their graduated members watching over them, the members graduated with a big performance.

The theme of the concert was "Matsuri (festival)", their wish to end it with smiles. It began with first generation members Tonooka Erika and Yokoyama Rurika's Japanese drum performance.

However, Tonooka bursted into tears while telling the audience, "We were able to keep running until today, and to stand on this stage all thanks to you guys. Please continue to support each of us after our graduation." It wasn't only Tonooka who could not hold back tears as other members also started shedding tears one after another when they performed their farewell ballad song "Sayonara, Matane, Daisuki" as the encore. The venue that drew a full house was also filled with tears and cheers.

At the very end of the live concert, the members performed their masterpiece "Moteki no Uta ~season2~" along with a comedian Bakarhythm, who is the MC of the group's TV program, with smiles.

Idoling!!! was formed as a 9-member group in October 2006 with its self-titled TV program "Idoling!!!" on Fuji TV, and they made their CD debut back in July 2007. Up until now, they released 24 singles and 7 albums.

After the graduation, each member will continue their individual activities.