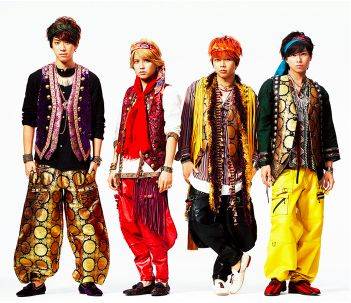 The title track is currently being used as the opening theme for NTV's anime "Kindaichi Shounen no Jikenbo R". It's described as a classic pop song based on Sergei Rachmaninov's "Rhapsody on a Theme of Paganini" and arranged by female conductor Nishimoto Tomomi. Conducted by Nishimoto, IlluminArt Philharmonic Orchestra is in charge of the music.

The single will be released in limited and regular editions both with two discs. In addition to the PV, the limited edition DVD will include making-of footage. As the coupling tracks, the limited edition CD will come with a currently untitled number, whereas the regular edition CD will contain two additional songs titled "Eien" and "SPEAKER". Check out the track list below!

Image: Johnny's net
Thanks to minlilin for the tip!