WaT to disband in February 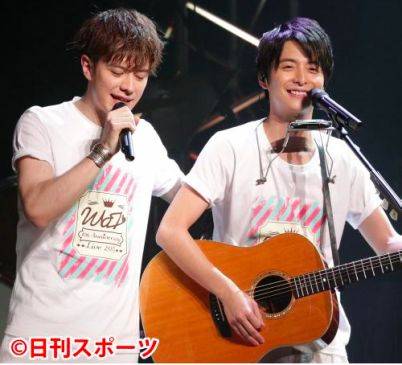 On December 6, Wentz Eiji and Koike Teppei announced the disbandment of WaT.

The duo made the announcement on stage of their 10th anniversary live at Shinagawa Stellar Ball. During the daytime show, Wentz began by saying, "WaT will disband after our album release next year." The crowd of 1,800 people gasped with surprise. When Wentz's eyes started tearing, Koike took the microphone and explained, "It has become difficult to give our 100% as WaT."

In February, WaT announced that they would be resuming their activities after a 5-year break. This day marked their first concert in about 8 years. Reportedly, the duo started talking about their disbandment in early November. "We never really talked about the reason. We thought that as long as 1 and 1 equals 10, it would be okay. But we can't be 1 and 1 forever. We have to grow up," said Wentz. Koike added, "As my individual work increased, I found the path I want to carry though with."

WaT will release their best-of album "Sotsugyou BEST" on February 10. Their handshake event the following day, February 11 will mark the last of their activities.

Source & Image: Nikkan Sports
Thanks to minlilin for the tip!