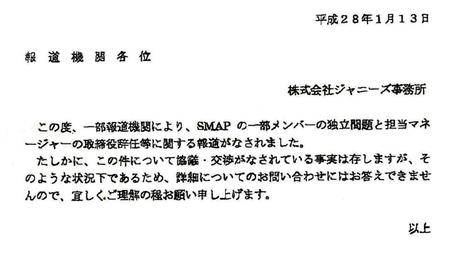 As we reported earlier, media outlets reported that SMAP is disbanding.

According to Sponichi Annex, on the 12th, the group's 58-year-old female manager who is often described as their 'foster parent', resigned from the position of director from J Dream, Inc., a subsidiary company of Johnny's & Associates, inc., and she will also be leaving Johnny & Associates, Inc. next month.

Apparently, four members out of five; Nakai Masahiro, Inagaki Goro,Kusanagi Tsuyoshi, and Katori Shingo also showed their intentions of leaving the agency with her, while Kimura Takuya decided to stay with the company.

Therefore, the media outlets reported that it could be a disbandment of the group.


On the afternoon of the 13th, Johnny's & Associates, inc. released an official statement.

The statement said, "Recently, there was a report regarding some SMAP members' leaving and their manager's resignation from a directors position. It is true that we are having consultation and negotiations about the matter, however, we cannot answer any detailed inquires yet."

Source & Image: Daily Sports Online
Thanks to minlilin for the tip!