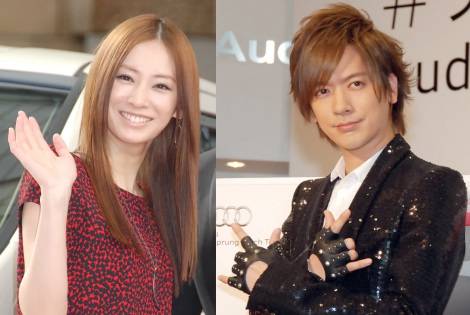 On January 11th, Kitagawa Keiko and DAIGO announced on their official sites and blogs that they have submitted a marriage registration.

Kitagawa wrote, "It's private, but I would like to make an announcement. I, Kitagawa Keiko, have registered a marriage with DAIGO-san today on January 11th. In this year which I will become 30 years old, I am starting to walk toward a new life. In order to grow more as a human and as an actress, I will face with each role/work sincerely more than ever without forgetting my feeling of gratitude to everyone."

DAIGO also made the announcement, "Though this is private, I have submitted a marriage registration with Kitagawa Keiko-san who I've been dating today on January 11th. I always wanted to make this announcement properly by myself with my own word after we officially got married, so I am very happy to be able to finally tell you. I would like to make a fun with full of smiles, rock and 'wish' family with each other. While helping and supporting each other, I will also work harder than ever."

The couple met through TBS drama "LADY ~Saigo no Hanzai Profile~" that aired in 2011, and their relationship was first reported in 2014. Apparently, DAIGO proposed to her after he ran 100 kilometers as a charity marathon runner for "24-Hour Television" back in August, and there was a rumor that the two would tie the knot sometime in January.

Source & Image: Oricon
Thanks to Karen Pang for the tip!