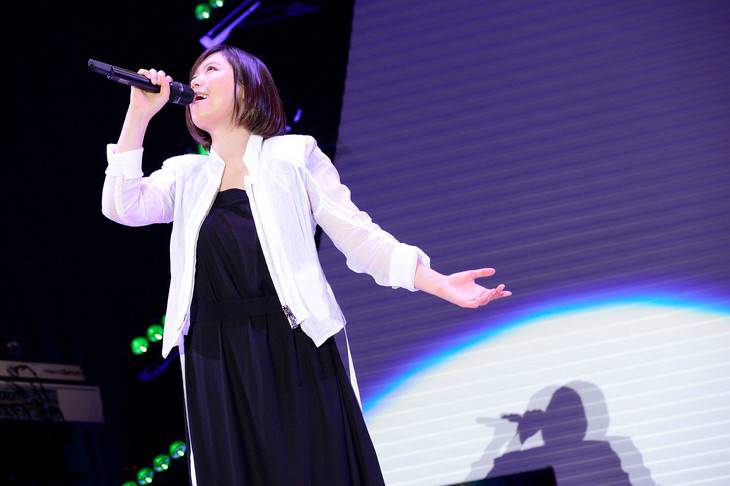 Singer-songwriter Ayaka held a special live at Yoyogi National Gymnasium on the day of her 10th debut anniversary, February 1.

Ayaka kicked off the live with her hit song "Mikazuki". During her first MC segment, she said, "It's already been 10 years. I can't express in words how happy I am to have worked with the music I love these past 10 years and that I was able to reach this milestone with everyone. Thank you!" Following this, Ayaka sang a variety of her songs including her second single "melody" and her first single after her comeback "beautiful". In the middle of her concert, she recalled a day in February 10 years ago when she spent the entire day going to radio stations and CD shops. She also shared that during the time she went on hiatus due to Graves' disease, she realized that she couldn't live without music.

After a wardrobe change, Ayaka began the second half of her concert with "Tsuyoku Omou", then continued by singing "Te wo Tsunagou" and covering Alicia Key's "If I Ain't Got You". During "No end", "Have fun!!", and "Nijiiro", Ayaka got the crowd involved in a call and response. Finally, she closed the main part of her live with "Minna Sora no Shita", which she regarded as an "important song that connected me with everyone."

Ayaka took the stage for an encore and performed fan favorites, such as "Yume no Mikata ni" and "WINDING ROAD". Before the finale, the singer called out to the crowd, "In the next 10 years, I will aim for even greater heights and do my best to continue delivering songs to everyone, so please follow me." She added, "I wrote this song when I was just 16 years old. The feelings that I poured into this song back then haven't changed until now. I hope to believe in my own voice and continue walking forward, one step at a time." She then called it a night with her debut song "I believe".

During this live, Ayaka announced that she would hold a 10th anniversary arena tour later this year. The tour schedule can be seen below.