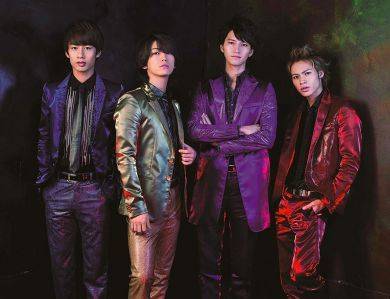 The tour will be held to commemorate the KAT-TUN's 10th debut anniversary. It will also mark their first tour after Taguchi Junnosuke's departure from the group as a member of three. For the upcoming tour, they are scheduled to make four stops starting on April 3 at Nagoya Dome.

It's also been revealed that KAT-TUN will release their first best-of album "KAT-TUN 10TH ANNIVERSARY BEST 10Ks!". This album will include 15 songs chosen by their fans among the 134 songs they've released thus far.

A special site will open on February 11 at 3:00 pm where fans can cast their votes for their favorite songs.  The album's release date and further details will be revealed later.