KAT-TUN to go on temporary hiatus 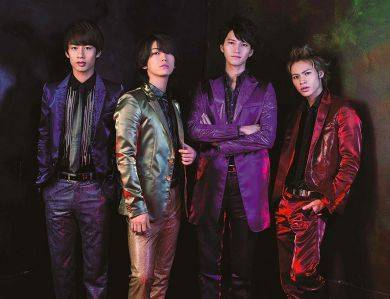 KAT-TUN have announced that they will go on temporary hiatus starting in May.

This announcement was made on February 13 via a video message by Kamenashi Kazuya, Ueda Tatsuya and Nakamaru Yuichi. They will go on hiatus after wrapping up their 10th anniversary dome tour "KAT-TUN 10TH ANNIVERSARY LIVE TOUR 10Ks!" on May 1 at Tokyo Dome. Ueda explained that the group will not be breaking up, but this will serve as a "recharging period". Kamenashi added, "We want to use this time for KAT-TUN's future." Nakamaru also stated, "We wanted to make this announcement ourselves so that there would be no misunderstandings."

On their first tour without Taguchi Junnosuke, Kamenashi commented, "By gathering here with everyone, I want to reaffirm and deepen our ties, and break a new start into our 11th year. So please come, by all means." He ended the video message with, "To coincide the tour, we will release our new album, so please pick one up to celebrate our 10th years together."