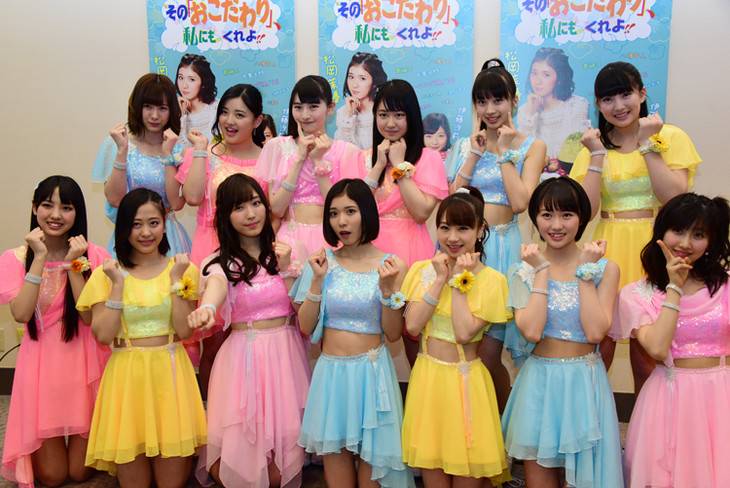 Morning Musume.'16 will be making an appearance in TV Tokyo's new drama "Sono 'Okodawari', Watashi ni mo Kure yo!!". In the drama, the girls will give a performance with actress Matsuoka Mayu.

This was revealed on March 20 during the event "Hello! Project Hime Fes 2016" at Pacifico Yokohama. During the press conference, the members of Morning Musume.'16 and Matsuoka made an appearance and spoke about working together on the drama. Matsuoka, who has been a fan of Morning Musume since she was young, joked, "After meeting them and practicing with them the past few days, I don't cry when I see them anymore. So, it's like director Matsue [Tetsuaki] can be charged with murder... I think something inside my died." She continued to say, "I still love them, and think they are cute, but right now, they are people that I have to work hard to dance with. Although it would be ridiculous to call them friends." Then, Iikubo Haruna responded, "We are friends!" to which Matsuoka smiled and said, "Really? I'm happy."

On their first meeting, leader Fukumura Mizuki reflected, "She told us, 'Don't come!!' so we were like, 'What should we do?" She added, "She also said that she couldn't look at us in the eyes, so we were like, 'What to do, what to do,' but when we starting rehearsing together, her eyes became serious. We were impressed by her professionalism. We will begin filming very soon, so we will do our best not to lose to Matsuoka-san."

After the press conference, Matsuoka made a surprise appearance in "Hello! Project Hime Fes 2016," and joined in on performing one of her favorite Morning Musume songs "One?Two?Three".

Based on a manga by Seino Toru, "Sono 'Okodawari', Watashi ni mo Kure yo!!" is a fake documentary which will premiere on April 8. Besides Matsuoka and Morning Musume.'16, it will star Ito Sairi, Saito Takumi, Okura Shimon, Yashima Norito, and Morning Musume OG.