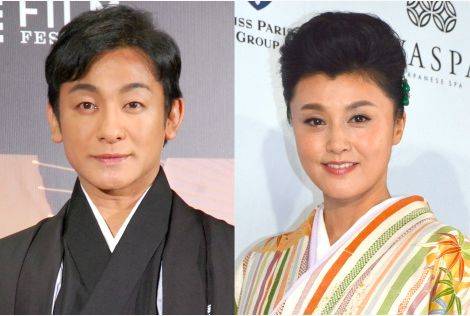 It's been reported that kabuki actor Kataoka Ainosuke (44) and actress Fujiwara Norika (44) have registered their marriage.

On March 30, the couple made the announcement via fax to several media outlets. They are scheduled to appear together at a press conference on March 31 to announce the marriage.

In May of last year, a tabloid magazine reported that the two were living together to which Kataoka responded on this blog, "That is not true." However, it was because of this report that they became closer and romantically involved. In August, they confirmed their relationship.

Back in February of 2013, Kataoka had announced that he was in a relationship in with talento Kumakiri Asami. At the time, when rumors of Kataoka and Fujiwara first surfaced, Kataoka had revealed that he and Kumakiri had split up, but Kumakiri denied it in tears while on a TV program, "We've never talked about breaking up." Kataoka made it clear, however, saying, "In my life, I've never loved two women at the same time, nor have I ever two-timed anybody."

Fujiwara was previously married to comedian Jinnai Tomonori. They tied the knot in May of 2007, but divorced two years later in 2009.