Kato Natsuki is pregnant with her first child 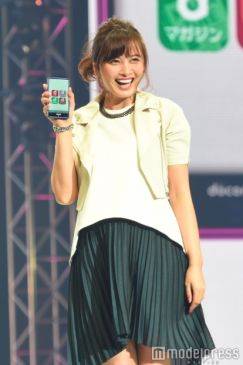 Actress Kato Natsuki (30) made an appearance in 'Kobe Collection 2016 SPRING?SUMMER' on March 12th at Kobe World Memorial Hall, and announced that she is pregnant with her first child. She said, "I can't walk the runway as I usually do, and I'm not even wearing heels. I'm sure a lot of you have noticed, but I have a baby inside of me."

Kato strutted down the runway with a white leather jacket and pleated skirt. Her eyes welled up with tears as she reflected on her history appearing in 'Kobe Collection', "I didn't know anything [about modeling], but after appearing in it many times, I've learned about the fun and beauty of modeling." She added, "Also, I'm very happy to stand on this stage carrying a new life."

The actress is expected to give birth this summer. "Until then, I will work hard. I will be returning to the stage, so please support me," she declared.

Kato married a non-celebrity man on June 6, 2014, then held her wedding ceremony in March of the following year. During event appearances in the past, she had expressed her dreams of building a family.