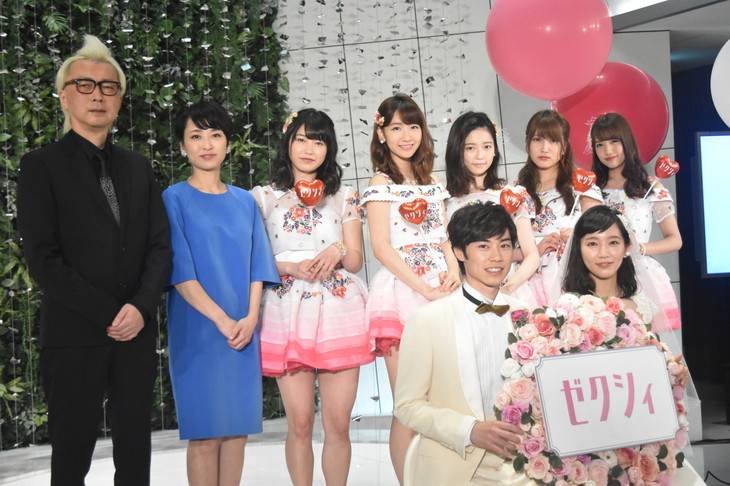 On May 20, members of AKB48 attended Zexy's new CM and CM song presentation event in Tokyo.

During this event, actress Yoshioka Riho, actor Tozuka Junki, Zexy chief editor Hirayama Ayako, and CM director Yanai Michihiko held a talk session. They talked about the CM audition, shared episodes from the CM shoot, and introduced the course of events until the CM's completion. In the CM, Yoshioka and Tozuka play the role of a married couple. On her "partner", Yoshioka stated, "From before the shoot, I was confident that we would be able to make a good CM together."

From AKB48, Yokoyama Yui (Team A), Kashiwagi Yuki (Team B), Shimazaki Haruka (Team A), Kato Rena (Team B), and Iriyama Anna (Team A) appeared at the event. Yanai explained that the CM song "Shiawase wo Wakenasai" would be sung by the senbatsu members to be determined at "AKB48 45th Single General Elections" on June 18 at HARD OFF ECO Stadium in Niigata. This song was composed by Yanai, written by Akimoto Yasushi, and arranged by Kameda Seiji.

Until the senbatsu members are determined, the demo version of the song will be sung by Yanai and Kameda. Kashiwagi said, "It's the first time that someone else will be singing AKB48's song before its release, so it's very fresh." Then Yanai revealed that this was planned by Akimoto Yasushi. "Isn't it horrible?! He [Akimoto] comes up with the strangest things," he joked.