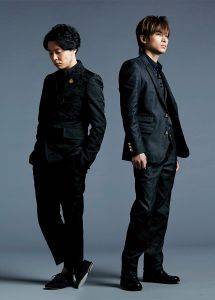 KinKi Kids' new single "Bara to Taiyou" is scheduled to drop in stores on July 20.

The single's title track was written and composed by Yoshii Kazuya of THE YELLOW MONKEY. The Limited Edition A DVD will include the PV and making video for "Bara to Taiyou," while the CD for Limited Edition B will contain a song called "Unlock Baby" written by Koide Yusuke from Base Ball Bear, and its DVD will include a special footage. The jacket covers were shot by actor Saito Takumi.

To commemorate their 20th anniversary, KinKi Kids will launch a "KinKi Kids 20th Anniversary Campaign" starting with this single until their 2017 releases. Through this campaign, you can collect points to receive a special present. More details will be revealed via the duo's official website later.