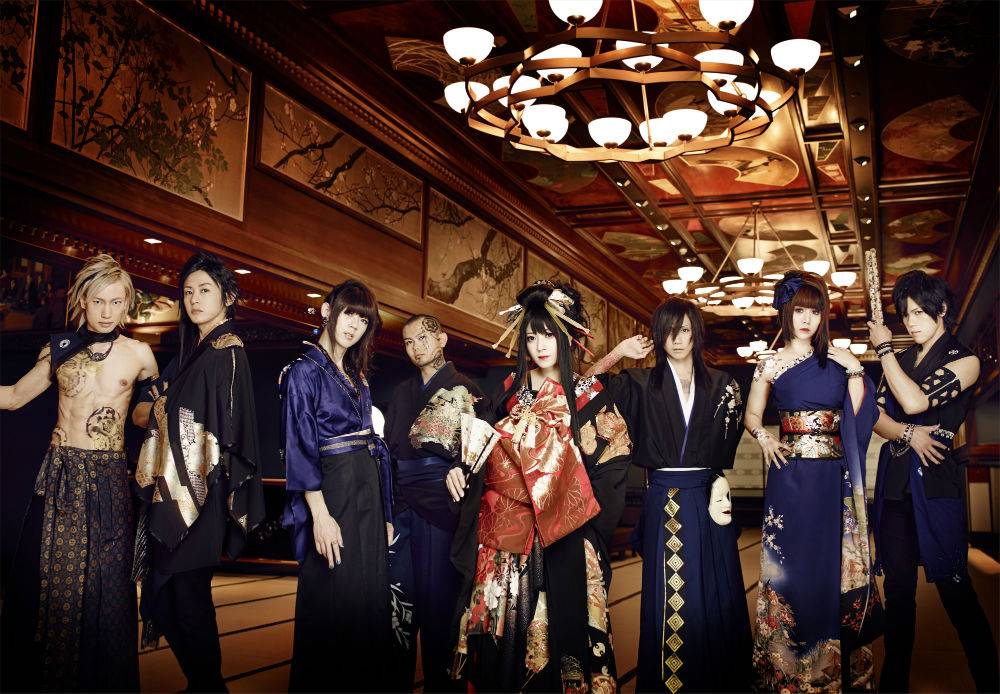 Band to Return to the States After Their Wildly Successful U.S. Debut Shows in NYC and SXSW and Sold Out Spring Tour in Japan

"Is there another band at SXSW that fuses traditional Japanese instruments – shamisen, shakuhachi, koto, and other things that originated in the 16th or even 8th century or earlier – with classic rock-and-roll style and Vocaloid pop novelty? If there is such a group, I don't know about them yet; and anyway I doubt they'd display the ninja-level music skills and senses-galvanizing showmanship of WagakkiBand, the reigning superstars who are playing a single SouthBy gig on Friday at midnight."

"This band stands out not only because of its great music, but what it brings in presentation.....the crowd went nuts. WagakkiBand is a music act that you need to get into....There is nothing like it right now,"

- Otakus and Geeks of their Irving Plaza show.

Wagakkiband return to the US this July with three shows in California as part of their "Deep Impact" 1st US Tour. These dates are a continuation of their two shows this past March, the first a capacity crowd at New York's Irving Plaza followed by their debut at SXSW with both NPR and Austin Chronicle recommendations they were one of the buzz bands of the festival. This announcement also comes on the heels of their April/May sold-out tour of Japan.

*The tickets will be On Sale on May 20th at the following site:

The female-fronted Japanese 8-piece have a track included in the NPR Austin 100: a SXSW 2016 Mix. You can check out the full compilation, "a remarkable six hours of music, painstakingly culled from a bulk playlist spanning nearly five days."

WagakkiBand fuse? Shigin, poetry recitation rooted in Japanese traditional performing arts, Wagakki, traditional Japanese musical instruments, and rock music to bring a fresh and yet authentically Japanese live show. Their YouTube smash hit,"Senbonzakura" (https://youtu.be/K_xTet06SUo) has over 40 million views and counting, and their latest single, "Hangeki no Yaiba" is the theme song for the dTV original series of mega multimedia hit, "Attack on Titan."

YASOUEMAKI is available in the US at iTunes, Spotify, and other online stores.

Front woman Yuko Suzuhana is the champion of a nationwide Shigin contest. Backing Suzuhana are 7 members playing traditional instruments including Shakuhachi (bamboo flute), Shamisen (3 string guitar like instrument), Koto (Japanese Harp), and Taiko (Japanese drum). They released their debut album Vocalo Zanmai in 2014, which hit Top 10 twice during a 22-week stay in the Top 100 of Japan's Oricon weekly charts while their video for "Senbonzakura" hit 10 million views within a few months of release. The video now boasts over 40 million views.

Album "Yasoemaki" is available on Spotify in US, Canada and Mexico