A Musical Journey Like No Other: WagakkiBand's 'DEEP IMPACT' Into the US 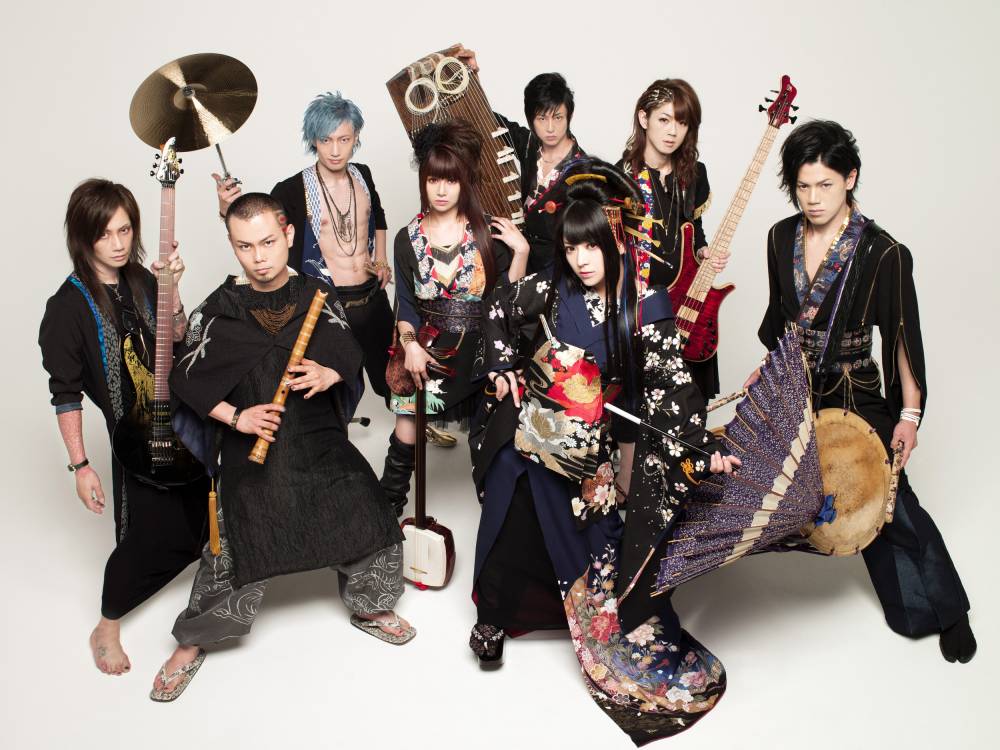 Join us on a musical rock adventure with some pit stops in Japan - this is the invitation that WagakkiBand extended to the fans gathered at Club Bahia in Los Angeles, California, the first stop on their first US tour titled "Shougeki ¢ DEEP IMPACT-".

Fans eagerly accepted this summon and threw themselves into every aspect of the concert - from clapping, cheering, fist pumping, head banging and even participating in a special sanbojime towards the end of the show. What would have been an ordinary Tuesday night was instantly transformed into a mystical journey the second the members of WagakkiBand stepped onto the fog-filled stage.


All extremely talented and accomplished, WagakkiBand consists of eight members. Lead vocalist, Yuko Suzuhana, began her trek into the music world at the young age of three and it has to lead to her recent victory at the Nationwide Contest of the Nippon Columbia Japan Poem Recitation Competition. Koto player, Kiyoshi Ibukuro, has had the opportunity to perform in eight countries outside of Japan and as a result he is motivated to explore the possibilities of koto as a Japanese instrument. Daisuke Naminaga plays the Shakuhachi for WagakkiBand of which he has been awarded a master license of Tozan-style Shakuhachi and currently teaches this instrument at several colleges. Beni Ninagawa has been playing the Tsugaru-jamisen for quite a while, but her musical career goes back even further to her days of studying traditional folk song in Osaka at a very young age. Wadaiko drummer, Kurona, has performed in more than 15 countries and he is actively involved in performing with other artists. Machiya, guitarist, is also the guitarist/vocalist of ma:a.ture, a popular band in the Indie scene. Bassist, Asa, is best known for his appearances on Niconico Douga as a user of Vocaloid. Last but not least, the drummer Wasabi might be the youngest member but he is hugely popular on Niconico Douga's renowned "Played It" category. Each band member's diverse and expert background all accumulated to a fantastic performance that was exhaustive in its emotion.

No expense was spared in setting the mood for the night and WagakkiBand pulled on the heartstrings of their audience. They kicked off the night with the upbeat fan-favorite "Strong Fate" that rallied the crowd, but promptly brought them back down to earth in an eerie, murky, foreign land with "Tengaku". The blue lighting that fell softly on the seven members combined with the otherworldly sound of the shakuhachi left every attendee with a calm transfixion on the music. Yuko's clear and vibrant voice always stayed well above the music and lead the fans right to the end of the song.

The musical voyage continues as Kurona's powerful taiko drumming in "Valkyrie" hit the chests of every audience member like a wave crashing onto the ocean shore. The taiko drums have two effects - they raise the energy of the fans while transporting them from the venue onto a samurai battlefield. During "Furin no Utautai" the blue lights came out again and highlighted the song's slow start. The crowd is transfixed, which brings the focus to the shakuhachi and koto's elegant sounds. The taiko drums slow beat feels like a heart pulse that is flooding the room.

After giving the crowd a taste of the sounds and songs that this talented band is capable of creating, Yuko grabs the opportunity to explain the band, ""Wagakki is Japanese traditional instruments like shakuhachi, shamisen, koto, and wadaiko! We use wagakki and western instruments like drums, guitar, and bass! And my style of singing is called shigin!" It was at this point where the crowd was instructed to refer to the flyer they were handed upon arriving at the venue that was meant to accompany Yuko's special shigin performance. This flyer had the lyrics to the piece written in Japanese and translated into English. Yuko then proceeded to sing accompanied only by Daisuke's shakuhachi and Kiyoshi's koto.

The set list continued to walk the band and crowd through a melodious excursion with pit stops that took the form of instrumental performances. The first of these instrumental breaks started with Machiya's guitar remix of "Amazing Grace". Almost as suddenly as it began, it changed to a rock tune and Kurona's taiko drum was brought in. The now buoyant ballad was the perfect introduction for Yuko to re-enter the stage sporting a fox mask, while dancing first with a fan, then with a long, elegant sword. At the start of the next song "Homura", Wasabi hopped onto the center of the stage and flashed his bare chest and then turned around to show the audience the kanji that was drawn onto his back in black calligraphy. Machiya was the last to enterwearing a noh/kabuki looking mask. Yuko even brought out a traditional-looking red umbrella during "Shiromadara". These musical breaks coupled with customary Japanese objects aided in refocusing the crowd on the Japanese aspects of the performance.

The night culminated during the Wadaiko Drum Battle between Kurona and Wasabi. The two earnestly launch into a high beat taiko/drum instrumental battle. The high-paced beat emitting from both sets of drums gives the feeling of being in a speed chase and the crowd starts to clap - unprompted from the band. Powerful and engaging, the Wadaiko Drum Battle pulled in the fans with its humor and reminded all there is always room for fun during a musical performance.

As the night came to an end, Yuko announced that the last song would be "Ikusa" to which the fans shouted a unanimous scream of "No!" After the last chords of "Ikusa" were played out, WagakkiBand bowed their way off the stage and the audience almost immediately began a call for their return using "Wa Ga Ki" as their chant. Once they did, the two encore songs that were played had the most energy of the night both from the band and audience. The first "Kishi Kaisei" is TV Tokyo's theme for the Rio Olympics and will be made available worldwide on August 17. The other, "Senbonzakura" is the song that arguably made WagakkiBand famous around the world and was a huge hit on YouTube.

The same musical invitation was extended to WagakkiBand's followers in San Diego on Thursday, July 14th. They took the fans gathered at The House of Blues on a very similar melodic journey but with variations in the pit-stops and presentation. Right off the bat, the elevated platforms at the front of the stage set up the environment different than Club Bahia in Los Angeles. The platforms made it so the audience could view each and every one of the band members motion with clarity; allowing for the full effect of each movement to hit them with the utmost emotion. Yuko's dramatic hand motions were now intensified by the flowy sleeve of her yukata-styled dress. These gestures perfectly coupled with her voice to lead the audience to the emotions that she wanted them to feel; happy, sad, or to simply leave them with a sense of awe and mystery.

Machiya performed the same "Amazing Grace" remix as he did in Los Angeles but the song took a distinctly different twist at the end. When Kurona came to join Machiya, Yuko joined them. This time however, Yuko appeared to manipulate the two band members, as a puppeteer would control their puppets by pulling on their strings. This unique display inspired a feeling that it was not the musician who plays the music but the music that plays the musician.

Even more than the Los Angeles show, the San Diego show employed the use of lighting and band interaction to direct the crowd through the euphonic trek. Blue lights were used to set a calm mood for certain songs while a white spotlight on Yuko highlighted her singing voice. These two vital pieces lead the fans further into the song where one could hear and see the emotion on Yuko's face. For slow songs like "Furin no Utautai" that contain a lot of sentiment, it would leave the audience with a wandering, lost feeling but without fail the fans would find the end destination of the song with Yuko's clear voice. Unlike the Los Angeles audience, the San Diego WagakkiBand lovers took much longer to warm up and get into the music, but towards the end of the night, they were waving their glow sticks and hands in the air.

Feeding off of their sparked energy, WagakkiBand rounded out the night with their unique brand of antics. Asa and Beni took center stage and started to have a face-off war; they continued to make funny faces at one another to the screams of encouragement from the crowd. The audience shouted out in elation at Machiya's guitar solo and he grinned back at them with a genuine warm smile. The crowd's new-found liveliness meant that they reacted more loudly to prompting from the band. Kiyoshi would point at the fans to which they would scream back a resounding "Hey!" that triggered a round of laughter from the koto player. This infectious happiness left both the band and audience with a warm feeling of contentment as the night came to an end.

Moving onto the last show of the tour, WagakkiBand arrived in San Francisco on Saturday July 16th. While the set list to the three shows was identical, the near-capacity crowd at The Fillmore in San Francisco set a different tone. While the shows in LA and San Diego had a more intimate, close feel, the show in San Francisco was more alive with both a bigger stage and a larger crowd.

While the LA and San Diego crowds took some time to warm up to the band, The Fillmore audience was loud and more than willing to show their emotions from the start, complete with more glow sticks and penlights than were seen in the previous shows. On stage, the antics of the band, such as the in-air splits from Daisuke, Machiya's amusing bare-foot dancing, and the powerful shamisen riffing of Beni, enlivened the audience in a way that seemed to give power to the band as well.

Elsewhere the show was familiar, but different. The MCs took on a personal feel and the stage lighting once again did a perfect job to set the mood. Machiya's take on "Amazing Grace" was in rare form here and the Wadaiko-Drum battle kept the audience on their toes as Kurona and Wasabi traded off powerful rhythms that shook The Fillmore to its foundations. "Yoshiwara Lament" was a particular favorite for the San Francisco show and bassist Asa (who composed the song) joined in by singing along, something that while not unique to this show, was not seen as often as Machiya's backing. Yuko in turn favored Asa's side of the stage for the performance and their antics drew a huge response from the San Francisco audience.

A mixed crowd of old and young, fan and newcomer alike, brought WagakkiBand's DEEP IMPACT Tour to a powerful end. Seeing the lines at the merchandise tables at all the shows, the lines for the special VIP sessions, and the amount of people who were signing up for the international fan club, it was clear that this wasn't the last the US was going to see from WagakkiBand. This was just one stop on their amazing musical journey. 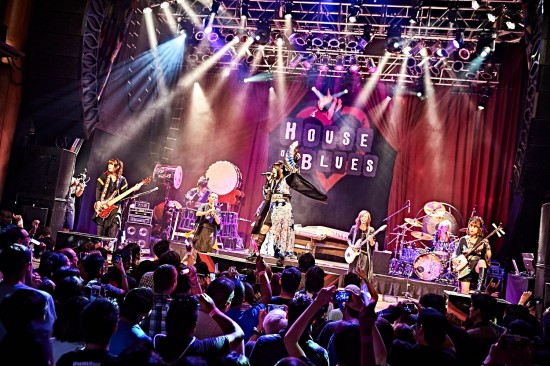 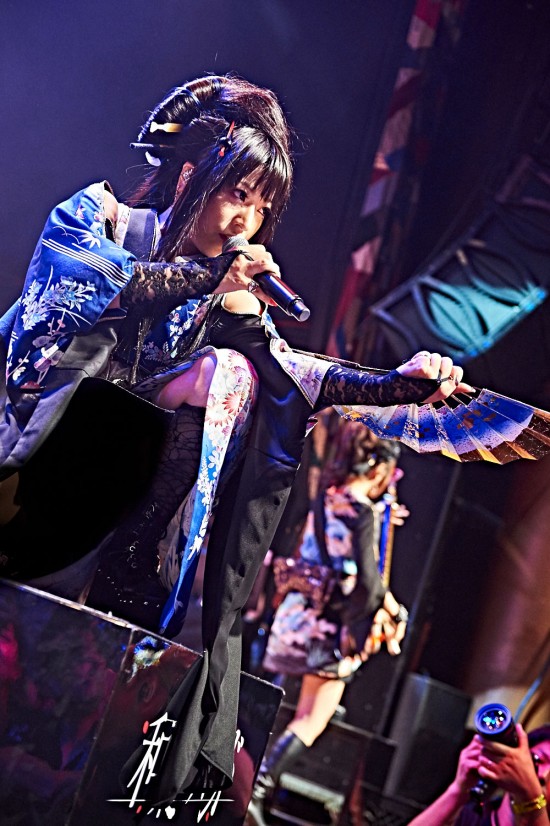 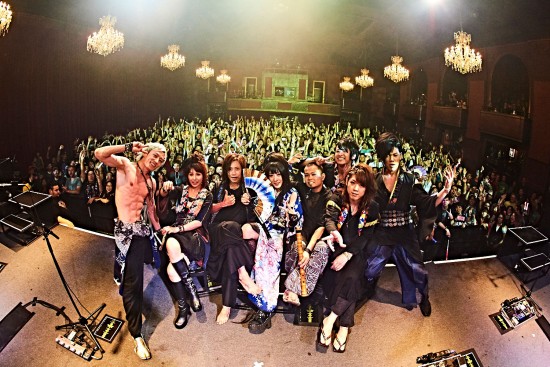 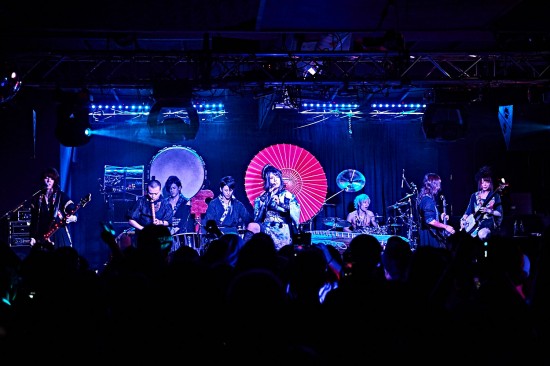 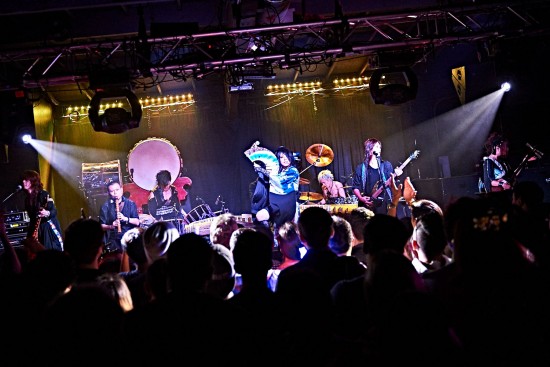 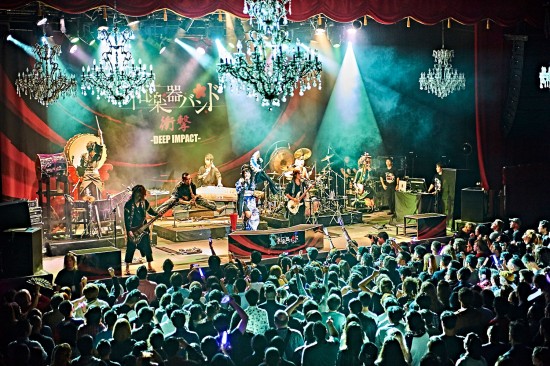