Kojima Yoshio reveals a two-shot with his wife 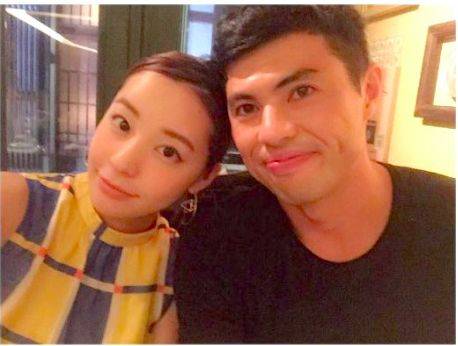 On July 31, comedian Kojima Yoshio attended a release event for his DVD Book 'Kojima Yoshio no Yattemi Taisou'. This marked his first public appearance after announcing his marriage to an office worker 7 years his junior. At the event, he revealed a two-shot of him and his new wife, Ai.

The photo was taken from Ai's Instagram post from last month. Her caption reads, "It's a personal matter, but I married Kojima Yoshio-san on July 18, 2017." She continued, "It was my 28th birthday. For him, a swimsuit comedian, it was 'Umi no Hi' [Marine Day]. We were both able to begin a new start."

At the event, Kojima revealed that he decided to get married because their relationship was going steady. "Normally, when a knife doesn't cut well, you buy a new one, but she bought a grinding stone and sharpened it. I am a comedian with a lot of ups and downs in a fluctuating entertainment world. When I saw that, I thought that she would make a wonderful spouse."