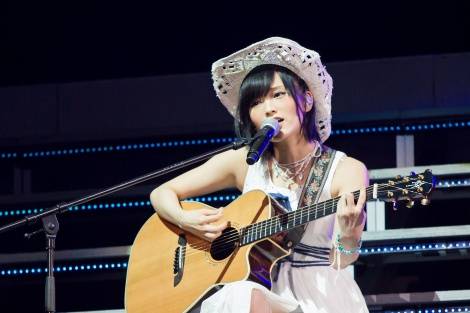 NMB48 member Yamamoto Sayaka will be making her solo debut with an album scheduled to be released on October 26.

She made the announcement by herself on a radio show.

The solo album, currently untitled, will contain 12~13 tracks.  Music producer, and former Tokyo Jihen bassist Kameda Seiji serves as its sound producer, and the tracks that are provided by artists include GLAY's TAKURO and Suga Shikao. Songs written and composed by Yamamoto herself will also be included.

On her solo debut, she stated, "While conducting my activities as an NMB48 member, I always had the dream to be a singer-song writer in my heart. I feel that this album would be the first step to realizing my dream. I want to send out my songs to many people, and it is in production with staff members. Hopefully, it will be 'big' step towards the dream!"

Yamamoto will be the second NMB48 member to make her solo debut, after Watanabe Miyuki who released a solo single after winning the "AKB48 Group Janken Tournament 2014."